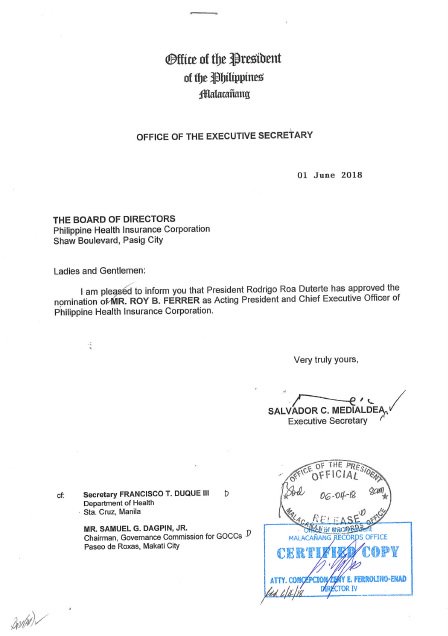 Reacting to the appointment, Ferrer said he will do his “best to be an effective public servant and to carry out the mandate” given to him by the President and Philhealth.

Ferrer joined Philhealth in February last year as representative of the employer’s sector.

Dela Serna’s removal came a month after the Commission on Audit released its report finding that Dela Serna spent P627,293.04 to cover her travel expenses to and from her home province of Bohol to Manila.

Dela Serna, who was named officer-in-charge in April last year, is also accused of illegally terminating 17 casual employees and deducting P2,200 from the 2017 collective negotiation agreement incentive of rank-and-file employees.

She had earlier asked for an audience with Duterte so she could explain her side.

As of posting time, GMA News Online is seeking the reaction of Dela Serna over the decision of Duterte to replace her.

text VIRGIL LOPEZ with a report from ANNA FELICIA BAJO